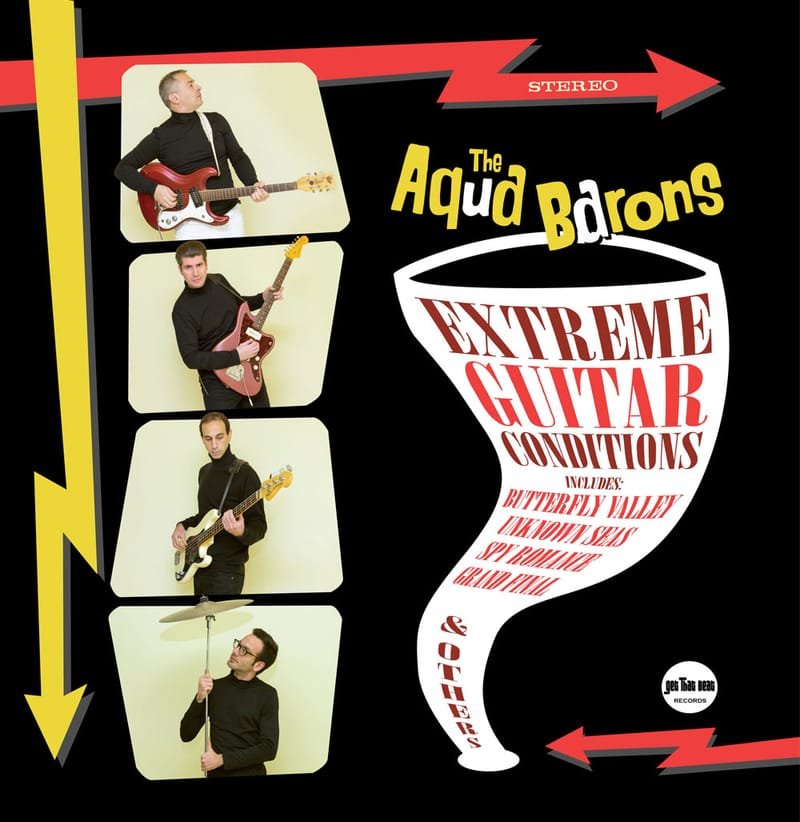 The Aqua Barons were formed in January 2010 in Lechaion, Corinth by the two brothers Petros & Philippos Sotiropoulos, they really dig vintage gear & influenced from traditional So-Cal surf music, with guitars soaked in reverb and fuzz, and from the lyricism of the European instro bands from the 60's as well!!! Their 1st instro-strike was in 2014 via the comp ''Searching For Atlantis'', including the ab-fab tracks ''Osonupo'' & ''Fuzzlalum'' & their 1st full-length released two years later called ''Southeast Stompers'' (Green Cookie Rec.). The same year the instro magazine Continental, picked up ''Into The Deep'' for the CD-comp # 24!! Their 2nd full-length ''Extreme Guitar Conditions'' is out, gathering 10 brilliant tracks! The opening track ''Spy Romance'' is one of the best instrumentals ever written & I mean it, a catchy melody that will stuck on your mind, an up-tempo with fuzzed guitar parts, as well a bubble-up organ make this one a real masterpiece!!! ''Galaxy Cruise'' & ''Jungle Calling'' will travel you in a perfumed instro-exotica garden, while ''Butterfly Valley'' is another fave instro with nostalgic-bittersweet mood & ''Town Of Shelter'' is the perfect soundtrack for a movie, dealing with a ghost town, or maybe in far west where outlaws seek  protection from their predators?! (as Petros said). ''Crazy Orbits'' is an alternate space-instro-oddity, blended with Beat Oscillator sounds, a shot to the moon & back to planet earth!! You'll find also a 2nd & slightly different version titled ''Crazy Orbits (English Spaceman)''! ''Gulag Party'' is a fab drenched instro with Polka flashes, while ''Unknown Seas'' is a trippy tune with excellent guitar work, backed with nice backing vocals and Doo-Wop feeling & ''Grand Finale'' is a weird encounter with vibraphone, a mash of goosebump-melodies, kinda of like John Barry meet Henry Mancini's compositions!!! A must have for the reverb-heads, an instro-blast for any rock'n'roll fan out there!!! Don't miss this album for any reason!!!